Posted by Matt Kremnitzer at 9:53 AM Links to this post

I haven't posted here for a while, so I'm including links to my work from Camden Depot for the last month or so.

The Jake Arrieta Experience Moves on


Posted by Matt Kremnitzer at 6:45 AM Links to this post

I was able to write a piece on Kevin Gausman's major-league debut last night for ESPN's SweetSpot blog. You can find that article here.

I'm not sure if I'll get the chance to post future work there, but I can at least say that seeing the following this morning was pretty cool: 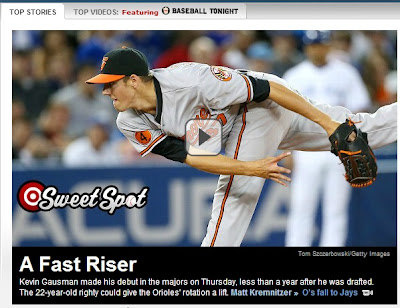 As always, thanks for reading. It means a lot.
Posted by Matt Kremnitzer at 10:21 PM Links to this post

In case there was any doubt, Alfred Morris is still awesome

In case you were wondering that first-year success would change Alfred Morris, you don't have to worry. He's still smart, humble, and willing to put in the necessary hard work.

In a recent interview with Shutdown Corner's Doug Farrar, Morris drops plenty of knowledge, including his advice to this year's rookie class, his willingness to learn and improve every day, how grateful he is that Mike Shanahan gave him the opportunity to compete for the job and eventually start, and some nuggets on Robert Griffin's III's progress. Here's a sample:


"I'm going to run hard and give you 100 percent on every play because every play could be my last, but I left a lot of yards on the field last year. Looking back on film, a lot of it was my aiming points in certain runs, or I was too tight and I couldn't get outside. Being more patient with my cutbacks -- I tended to cut back too soon. I was blessed, and I definitely don't take it for granted. Last year's behind me -- I'm beyond that."

I can't remember a single example of Morris not saying the "right thing" or giving a thoughtful, levelheaded response to any question. He's sort of like Griffin when he was first drafted by the team and gave countless flawless interviews, except RGIII is now saying things like "In a land of freedom we are held hostage by the tyranny of political correctness" on Twitter. If Morris ever said something like that, I think my head would explode. Then again, when you're an NFL quarterback and a superstar athlete, I guess everything you do or say is news. No pressure, no diamonds, and all that.

Anyway, Griffin is fantastic and is insanely talented, but I prefer the previously unheralded Morris. Not only is he a powerful and skilled running back, but he's still holding onto his 1991 Mazda for dear life: "It's in the shop right now -- just a little maintenance on the radiator when the season ended, and I'm getting the axle fixed. . . . I know that eventually, I'll have to park it, but I want to keep it as long as possible. I know people call me cheap, but I'm being smart. There's no reason to go out there and waste money -- instead of spending that on me, I can help bless somebody else."

Here's Manny Machado's go-ahead three-run bomb last night to complete the Orioles' ninth-inning comeback against the Red Sox. The Fenway Park faithful -- at least the ones still remaining -- were not happy:

Machado magic, indeed.
Posted by Matt Kremnitzer at 6:21 AM Links to this post

A quick note on John Wall

This is John Wall's third season. Here are his field goal percentages in those years:

But here are his percentages from the free throw line:

Obviously free throws are different than jump shots. There's no one guarding you, you're not jumping, you can take your time, etc. But that's at least a little confusing.

In last night's 95-90 loss to the Kyrie Irving-less Cavaliers, Wall had 27 points (and 14 assists) on 7-15 shooting -- not bad. But he also hit 13 of 14 free throws. Maybe instead of saying things like, "Everywhere is my sweet spot," he should just talk about his progress from the free throw line.

Posted by Matt Kremnitzer at 5:09 AM Links to this post

Bradley Beal is 19 years old. He's also on the Washington Wizards. And since he's both young and on the Wizards, it's surprising that he's actually getting better -- and fast. Check out his numbers by month:


That's more points per month on better overall shooting. Those five rebounds per game in February are looking pretty good. The dip in assists from December to January/February also coincides with John Wall's return from injury.

Beal is playing well and shooting the ball with confidence. He's not only one of the main reasons why the Wizards are winning, but also why they're so fun to watch right now. And hopefully he stays hungry (not an Andray Blatche kind of hungry).
Posted by Matt Kremnitzer at 7:10 AM Links to this post

When I write Orioles-related articles from now on (for the most part), they'll be posted at Camden Depot. Here are a couple of posts I wrote earlier this week:

As always, thanks for reading.
Posted by Matt Kremnitzer at 6:27 AM Links to this post

Krem's Sports mainly covers the Orioles, Redskins, Wizards, and Terps. I created this blog in 2007 and have contributed to it regularly since then.

It's been linked to by Mr. Irrelevant, NBC Washington, Redskins Blog, Big League Stew, and the D.C. Sports Bog, and has appeared in The Washington Post.

My article on Donovan McNabb's early season struggles was highlighted and quoted in a Dan Steinberg-written article in The Washington Post on Oct. 20, 2010. Check out the link.

Also, thank you to those who continue to visit and read the work on this site. It's greatly appreciated.